TNFSF receptors are of great importance in the anti-tumor immune process. They are expressed by a wide variety of immune cells including T cells and antigen-presenting cell populations, such as dendritic cells and macrophages, as well as by tumor cells themselves. This diverse expression pattern highlights the critical role that TNFSF receptors play in many parts of the body and in the various phases of the anti-tumor immune response.


TNFSF ligands naturally exist as homo-trimers with three receptor binding sites. The interaction of trimeric TNFSF ligands with their specific cell surface receptors leads to clustering of these receptors, followed by intracellular signal transduction. The trivalent structure of the TNFSF proteins and the resulting receptor clustering are prerequisites for the transmission of a signal delivered into the cell. TNFSF-mediated signaling induces a wide range of biological effects, including programmed cell death (i.e., apoptosis), proliferation, differentiation, and tumor growth. 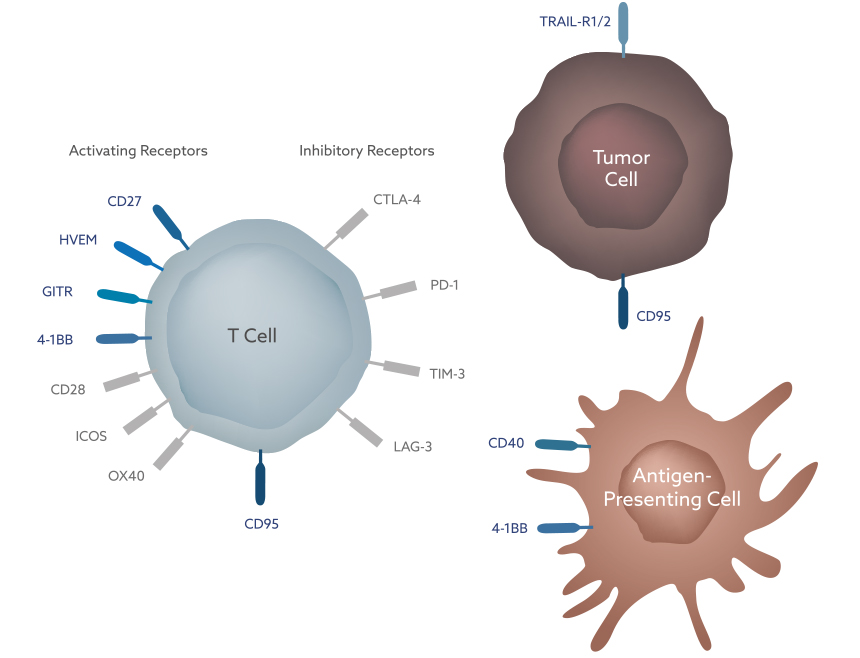 In a healthy organism, malignant cells are generally eliminated by a process called immune surveillance, meaning they are rapidly destroyed by the immune system. However, over time, malignant cells gain the ability to evade immune surveillance by expressing molecules that block the anti-tumor response of the immune system through the activation or inhibition of certain signaling pathways.

These molecules are excellent therapeutic targets in order to restore the immune surveillance in cancer patients, which has been demonstrated in recent years by the impressive clinical efficacy of immune checkpoint inhibitors, such as PD-1 inhibitors. A recent addition to the list of immune checkpoint inhibitors is the CD95 ligand (CD95L). There is increasing evidence that tumors expressing CD95L are able to kill activated T cells, thereby preventing their infiltration into the tumor as well as their survival inside the tumor. Apogenix is developing asunercept, a CD95L inhibitor which blocks CD95/CD95L signaling, thus protecting activated T cells and enabling them to fight tumors.

The anti-tumor immune response involves numerous signaling pathways that directly stimulate the activation and proliferation of immune cells. Many key molecules involved in these pathways belong to the TNF receptor superfamily.