Apogenix is developing a novel class of TNFSF receptor agonists (HERA-ligands) for the treatment of various types of cancer. Their unique molecular structure overcomes the known limitations of antibodies and other biologics targeting TNFSF receptors. Preclinical work at Apogenix has clearly demonstrated the producibility and biological activity of these novel HERA-ligands. 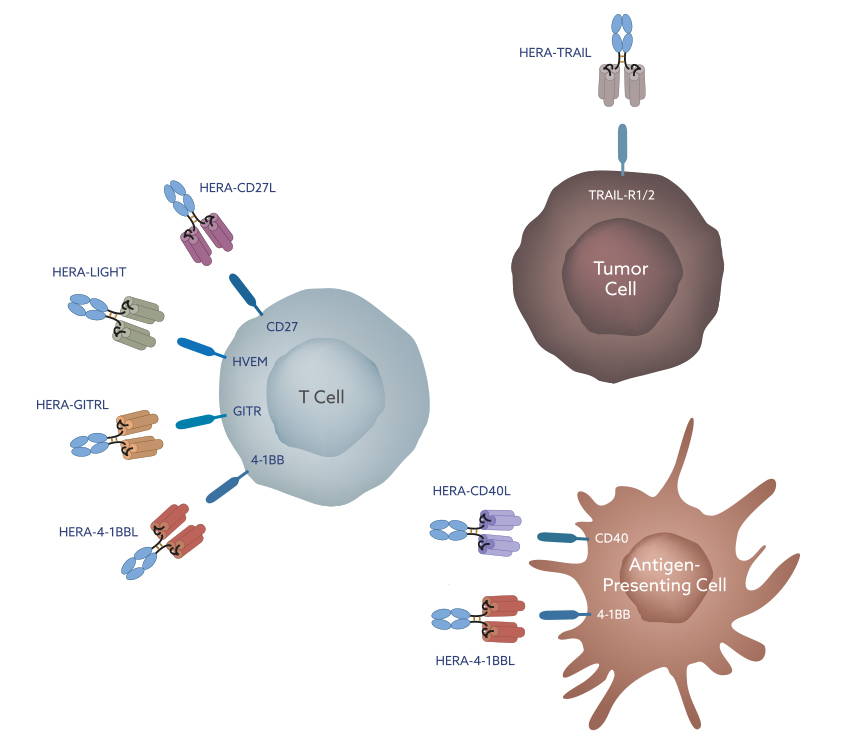 TRAIL receptors 1 and 2 are expressed by many different cells. The clustering of these TRAIL receptors following binding of their natural ligand leads to cell death, predominantly in tumor cells. Following the death of the tumor cell, tumor antigens are released and transported to a nearby lymph node. In the lymph node, these tumor antigens stimulate an anti-tumor immune response, potentially leading to the systemic elimination of the tumor.

The excellent antitumor efficacy of Apogenix’ TRAIL receptor agonists such as APG880 (ABBV-621) has been demonstrated in a large number of preclinical studies. Apogenix has entered into a licensing agreement with AbbVie in 2014. In March 2017, AbbVie initiated a clinical phase I study with ABBV-621 in patients suffering from solid tumors, non-Hodgkins´s lymphoma (NHL) or acute myeloid leukemia (AML).

CD40 is expressed on the surface of antigen presenting cells (APCs) as well as some tumor cell types. Binding of CD40 to its natural ligand leads to increased APC activation and an enhanced immune response. CD40 agonist therapy plays an important role in APC maturation and their migration from the tumor to the lymph nodes, resulting in elevated antigen presentation and T cell activation.

CD27 is primarily found on T and B cells. It is constitutively expressed at high levels by T cells and further up-regulated following activation. In addition to its important co-stimulatory role during the early stages of an immune response, CD27 has been shown to promote T cell survival and memory formation at later time points.

GITR is primarily found on the surface of T cells. It is constitutively expressed at low levels on naïve T cells and at high levels on regulatory T cells (Treg cells). Its expression is up-regulated following T cell activation. Binding of GITR to its natural ligand directly leads to increased anti-tumor T cell activation as well as their survival. It also reduces the suppressive abilities of Treg cells, further increasing the anti-tumor immune response. These diverse mechanisms show that GITR plays an important role in initiating the immune response in the lymph nodes and in maintaining the immune response in the tumor tissue.

4-1BB is unique in this group of molecules, because it is expressed on multiple immune cell populations including T cells, APCs (dendritic cells and monocytes), and natural killer cells. Although constitutively expressed by dendritic cells, it is only present on T cells following activation. Signaling through 4-1BB has a positive effect on activation, proliferation, survival, and function of various immune cells, especially CD8+ cytotoxic T cells. The diverse expression pattern suggests that 4-1BB agonists have profound effects on the initiation of an immune response in the lymph nodes, as well as on the maintenance of the response in the tumor tissue.

HVEM is found on a variety of cells including T cells, APCs, and other immune cells. Unlike other receptors, HVEM is expressed at high levels on resting T cells and down-regulated upon activation.

Data have shown that HVEM signaling plays a crucial role in the early phases of T cell activation and during the expansion of tumor-specific lymphocyte populations in the lymph nodes.